We have always associated water voles with rivers and canals and were slightly surprised when The Friends of Nevis announced a series of events to identify and survey water voles in Glen Nevis.  The first event was held on Monday 20th May as part of The Wild Lochaber Festival and we signed up, eager to learn more about this endearing little (or not so little) rodent.

The Nevis Gorge and An Steall waterfall is a very popular walk and the car park is often very busy.  The group met up at the Ben Nevis Highland centre, had a quick introduction and headed off to the car park after deciding upon car sharing. 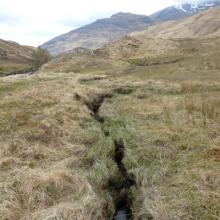 We had a further introduction to Water Voles once at the car park and had an opportunity to ask lots of questions.  We were surprised (again) to hear that Highland water voles are typically black in colour.  The water voles we had seen before on the Norfolk broads and on midland canals were brown.  The major threat to water voles has been the introduction and spread of American mink, though habit destruction through drainage, intensification of agriculture and building certainly play a role.  Female mink are small enough to fit down a water vole burrow, and a single nursing female can decimate a water vole population.  Mink have yet to make it to the upper reaches of Glen Nevis and the water vole has a welcome refuge.  Nevertheless, survival in such an inhospitable environment must be a challenge. 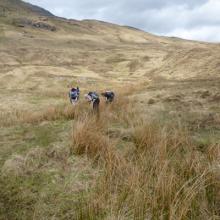 Water voles do not hibernate, instead building up food reserves in their underground burrows.  Spring is late this year and we were not sure whether they had yet emerged to feed on the fresh vegetation.   We knew we were unlikely to see any water voles, but nevertheless listened out for the distinctive plop as water voles enter the water.  Becks, the leader had actually seen a water vole at the site we were heading to, two weeks ago though, so fingers crossed.

The main objective of the event was to show volunteers how to spot signs of water vole activity and identify suitable habitat for survey work.  The river by An Steall waterfall is too rapid flowing and steeped/rocky banked for water voles and we continued on up the path for a mile of so.  The terrain flattened out to marsh/grassland with a series of small burns leading to the river.  Soft rush around the burns and purple moor grass around.  This is good water vole habitat.

The first sign of water vole was their holes.  Not just on the side of the burns, but also on land up to a couple of metres away.  Water voles live in a network of tunnels and chambers at different levels, providing protection from changing water levels and predators. 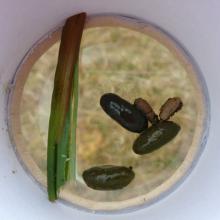 Another sign to look out for is water vole poo.  Being quite large, their poo is quite large too and is easily distinguishable from field vole poo by size.  Water voles tend to use latrine areas to mark boundaries, both in runs and on boulders in the stream.  One tip when surveying is to always walk upstream as otherwise you risk washing away any evidence of water voles.

Water voles are herbivores, eating grasses, rush and other herbs.  The entrance to their burrows is often grazed down to a little lawn as the female pops out feeding near by, always ready to pop back down the hole if a predator is spotted.  There are often clippings of grass and rush near the holes, another distinctive sign of vole activity.

Even though we did not see any water voles, we had an amazing day learning about these animals and learning about their habitat and field signs.  We would like to thanks The Friends of Nevis for organising the event, Becks the course leader for sharing her enthusiasm and knowledge and the other volunteers on the day who made the day so enjoyable and rewarding.

If you would like to find out more about water voles, check out the great resources on the SNH website.

Take a Walk on The Wild Side...

with over 100 wildlife focused walks across Lochaber, you'll be spoilt for choice

Ardnamurchan and The West Highland Peninsulas

Road to The Isles

The Road to The Isles

Take off for the day to see the puffins on The Treshnish Isles, A Day trip to Mull, Skye, The Small Isles, The Most westerly point on the mainland and many more local ideas for a day out